He describes himself as a ‘big Rangers’ fan and Francis Milligan, Allied’s Marketing Social Media Lead, says his journey to Lomond Street started when he was returning home from Spain after watching his team lose the Europa League final to Eintracht Frankfurt on penalties.

Francis had left on the Tuesday, drove overnight to London, flew to Almeria, hired a car to Malaga and spent the night there before heading for the game. Then he drove back to Malaga post-match, before his return flight in Almeria the following morning.

“I was on the return leg coming home after a European defeat in the final, so deflated, getting ready to get back to my current role at the time.

“That was with a marketing agency in Glasgow, where I’d ultimately burned out – from the usual things you would experience in an agency, but it was just getting a bit too much.

“I switched on my phone outside KFC at the airport in London, and I had three messages. One was from the boss, saying ‘I know you’re just travelling back but once you’re in can you look at these ads for this client?’

“One was my mum saying, ‘your aunt’s still got Jamie today’, which is my little boy. ‘She’s wondering what time you’ll be back’.

“So, I responded to mum first and then to Jay and said I was happy to have a chat.”

After a Teams chat Francis came in for an interview with Jay and Susan Smith and was offered the job less than a fortnight later.

“The interesting thing for me was I’m Maryhill born and bred, all my family are from Possilpark, Summerston and Ruchill, I know Allied, I know the brand, I know the business, but I never had an insight into what working life at Allied could be.

“However, my fiancée Stacey worked here over 10 years ago as part of the sales admin team and she said, ‘Go have a look’.”

Francis says he was intrigued with one of the interview tasks – “can you market campers, make a campaign for that” – and thought it sounded fun.

“I thought ‘this isn’t just a stuffy old car brand because from the outside world most people see Allied as being that. Even being local born and bred that’s how I saw Allied.”

However, having come from an agency life managing over a dozen clients, Francis says he quickly found out there was much more to the company.

“There was a bit of luck to it, but then when I got in to chat, I thought ‘there are seven brands here, it’s not just social, there’s a lot more to it’.

“The role ticked a lot of boxes. Three months I’ve been here now and I’m not looking back.”

Although he is still a “newbie” Francis says other people have come in since he arrived, and he likes being part of a growing team that’s developing and expanding.

Marketing, though, was not his first choice of career: “I started out as an aspiring journalist. I wanted to be a sports journalist. I was in the fourth year of school in 2009 and decided to get some sort of internship or work experience, which I did with Herald Sport.

“During that process press releases were given to me to read over, and I was then curious about where these press releases come from and how does this work?”

He continued with his writing but on leaving school applied to both Anniesland College to study Journalism and media, as well as applying to City of Glasgow College for an advertising and PR course.

“I’ve always been a bit arty, creative, musical-minded – I’ve always used the right side of my brain, the creative side.

“So, I thought, maybe the PR and advertising stuff is more for me and went into that with a very narrow mind of, ‘I’ll be a creative PR person’.”

A month into the course Francis realised he preferred marketing.

“I realised how quickly you can be really creative and can make a difference to people’s businesses. At the time my mum had a family business and I tried to do my own little thing here and there.

“My aunt also had a few local businesses in Saracen Street, so there was always this attachment of trying to grow and develop. I’ve always liked to help others do that and when I saw I could do that as a career that was a massive plus.”

Three years of Advertising and PR at City of Glasgow College followed, then a “hellish” year of commuting to Edinburgh Napier University. Francis had a spell at The Daily Record, then at the age of 21 took on a contract for Google – training businesspeople in website development, marketing strategies and PR planning and more, with and without the use of Google products.

He went freelance when Google closed the project and moved to Police Scotland as part of the marketing team at one of their internal bodies, before going back to Google to head up their Glasgow operation. This saw him touring Scotland in a 1966 Routemaster former London bus – to banks, libraries and universities, doing training with small businesses and remote communities to help them grow.

Francis’s contract was again cut short as the Google operation moved to Sheffield, and a year of short-term contracts between three marketing and PR agencies kept Francis on the go.

While enjoyable and fulfilling, the desire to be back training and presenting marketing and business knowledge grew too strong, resulting in Francis finding a role with Facebook, as a lead marketing skills trainer. Like the Google opportunity, Francis spent four months travelling across Scotland training small businesses and start-ups how to market themselves.

Shortly afterwards, as he was about to set up his own agency, Covid hit, leaving Francis and Stacey with a baby on the way and work drying up – until he started with another agency, where he stayed for 18 months before taking the leap to Allied.

Now settled in his new role, Francis is keen to see it develop.

“Jay is trying to build a specialist team within the marketing department, so he’s got a person for brand management a person for social, a person for SEO, meaning if we need a new blog, that’s Vanika, or for website development, we can ask Greg etc – coming from a position where I had to assume all of those specialist roles, I love having a collaborative team” 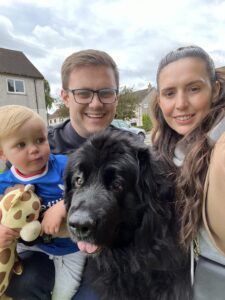 “With any role I undertake, I want to grow as well along with the business growing. I always want to develop to the extent that I’m also learning more and I can then impart that knowledge as well, which in the three months that I’ve been here has been noticeable already.”

Away from work, Francis says he’s the type of person that is always busy but never seems to be getting things done. He’s the assistant chairman of a social club in Maryhill that his late grandfather helped found over 50 years ago.

“I was asked through friends if I’d be willing to take it on, on the basis of ‘you know how to market something, so let’s market this place as a viable business, a place to come for a pint at the weekends and watch the football’ … so I said yes.

Something else takes up the remainder of Francis’s time – his young family. He and Stacey have been together for five years and became engaged in December.

They have a son, Jamie, and a dog – technically Stacey’s – a Newfoundland, so practically a Shetland pony.

“So, an ageing, large Newfoundland, an 18-month crazy child who likes to run around the house and throw things, climb and demand – there’s never a quiet moment really.

“We’ve got a smart home system and he’s learned that if he shouts ‘Google’ he can get things to happen in the house. Thankfully he’s not at the stage to get the full sense of where he can control things, but he’s getting there.

“Our weekends naturally revolve around Jamie’s schedule for eating and sleeping, but we make the time to have family days. Jamie loves to go swimming or visit the soft play; we also go out for dinner as a family regularly too or visit our relatives with whatever free time we have over the weekends.”

The couple share a love of Rangers and have been lifelong fans, but actively followed for over 10 years, supporting the club at their lowest points. However, with a son, a dog and work, they don’t get to as many away games as they used to.

Francis says: “Hail, rain or snow, no matter where we were I had a ticket and was on the supporters’ bus … Now, I don’t have that luxury of time when I’ve got the wee one, or we’ve got other things going on.

“We’re planning for our wedding and having a toddler means that sacrifices have to be made and we both agreed that away games were one of those things.

“But for home games Stacey and I are both there so that takes up part of our time as well.” 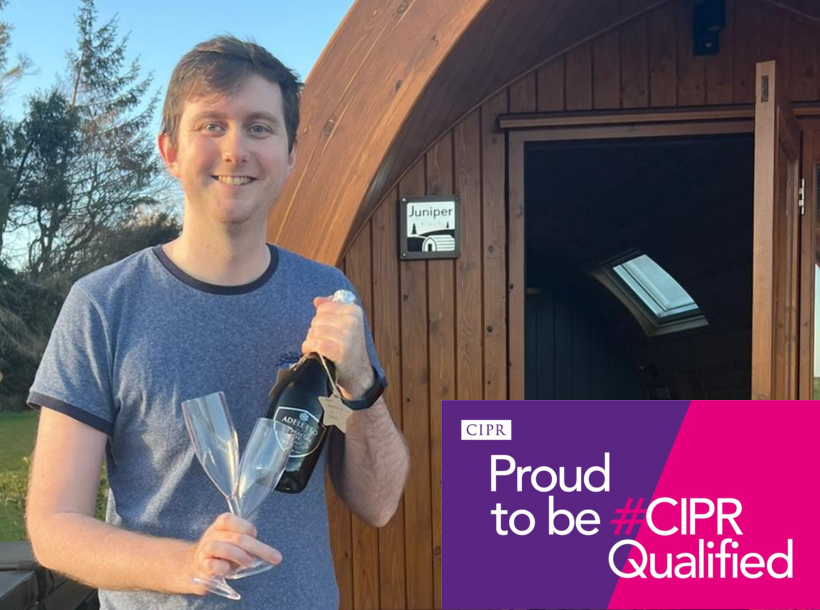 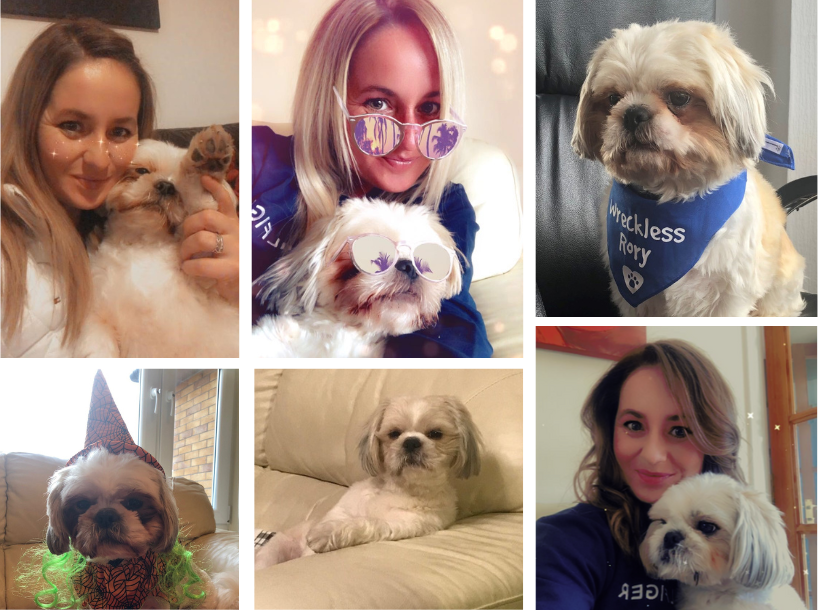 Dog lover Emma hits the heights with her charity fundraising

We use cookies on our website to give you the most relevant experience by remembering your preferences and repeat visits. By clicking “Accept All”, you consent to the use of ALL the cookies. However, you may visit "Cookie Settings" to provide a controlled consent.
Cookie SettingsAccept All
Manage consent

This website uses cookies to improve your experience while you navigate through the website. Out of these, the cookies that are categorized as necessary are stored on your browser as they are essential for the working of basic functionalities of the website. We also use third-party cookies that help us analyze and understand how you use this website. These cookies will be stored in your browser only with your consent. You also have the option to opt-out of these cookies. But opting out of some of these cookies may affect your browsing experience.
Necessary Always Enabled
Necessary cookies are absolutely essential for the website to function properly. These cookies ensure basic functionalities and security features of the website, anonymously.
Functional
Functional cookies help to perform certain functionalities like sharing the content of the website on social media platforms, collect feedbacks, and other third-party features.
Performance
Performance cookies are used to understand and analyze the key performance indexes of the website which helps in delivering a better user experience for the visitors.
Analytics
Analytical cookies are used to understand how visitors interact with the website. These cookies help provide information on metrics the number of visitors, bounce rate, traffic source, etc.
Advertisement
Advertisement cookies are used to provide visitors with relevant ads and marketing campaigns. These cookies track visitors across websites and collect information to provide customized ads.
Others
Other uncategorized cookies are those that are being analyzed and have not been classified into a category as yet.
SAVE & ACCEPT
x